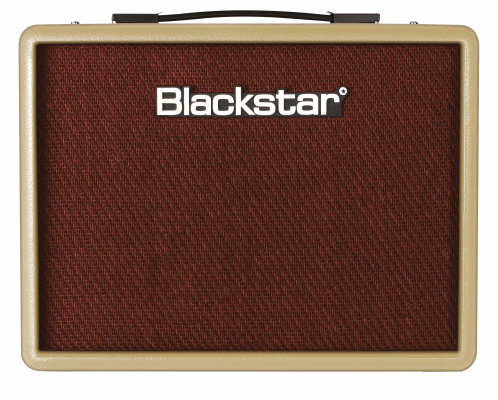 Features The DEBUT 15E is the practice amp, packing all the great tone and innovative features you would expect from a Blackstar. The patented ISF (Infinite Shape Feature) circuit gives you infinite adjustment over the characteristics of the tone control network and takes you from the USA to the UK and anywhere in between. So now you can effectively design your own tone and finally find ‘the sound in your head’. The DEBUT 15E also has a fully specified speaker emulated output allowing any guitarist to get amazing tone straight to tape or disk, or through headphones. Add to this an MP3 / Line Input, allowing you to jam along to your favourite tracks, you have everything you need for practising or recording. Gain control adjusts the amount of overdrive or distortion. When the Clean Channel is selected, low settings counter clockwise (CCW), will deliver a clean sound. As the Gain control is increased clockwise (CW) the sound will move from clean into break-up until, at its maximum position, a full crunch tone is arrived at. When the Overdrive Channel is selected, the Gain control adjusts the amount of overdrive or distortion. Low settings, counter clockwise, will deliver a clean sound on the edge of break-up. As the Gain control is increased CW the sound will become more overdriven moving through crunch tones until, at its maximum position, a full distorted lead tone is arrived at. The patented ISF allows you to choose the exact tonal signature you prefer. Fully counter clockwise has a more American characteristic with a tight bottom-end and more aggressive middle, and fully clockwise has a British characteristic which is more ‘woody’ and less aggressive.
Order Today 540-659-6687